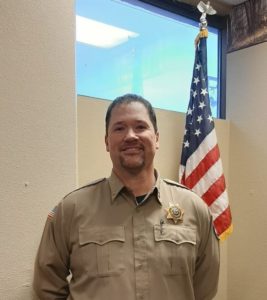 I was born and raised in Union County, where I have lived most of my life. I attended La Grande and Cove school districts, and have been a resident of the cities of La Grande, Cove, and Union. Some of my hobbies and passions include spending time outdoors camping, hunting and fishing. In April of 1999 I met my wife Tish. We were married in August of 2000 and she’s been by my side ever since. We have three children, Caleb, Tori and Kinzy.

I started my working career at Les Schwab Tire Center, where I learned/cultivated the true values of hard work, and the importance of customer service. After five years of working at Les Schwab Tire Center, I was promoted to Assistant Manager. I had the privilege to manage employees and work closely with the public. Through this, I learned that leading by example is paramount and successful organizations are best built when you have compassion, respect, and care for everyone you come into contact with; whether it was an employee or a citizen. I believe successful organizations, especially those that serve the citizens in a small community are best built from the bottom up with solid foundations. As your Sheriff I will make the foundation of the Union County Sheriff’s Office more rooted in the best interest of Union County citizens, because it is you who makes this county great!

After spending two years as a Reserve/Volunteer I applied for a full time position as a Patrol Deputy with the Union County Sheriff’s Office. I was selected and offered a full time job with UCSO in 2011. I felt in my heart this was the career intended for me. I discovered a passion for providing the people of Union County professional law enforcement service when citizens needed it most.

Throughout my career in law enforcement I have worked in many capacities with the Sheriff’s Office. I began as a Patrol Deputy, which entailed responding to a variety of calls for service throughout the county. This allowed me to learn the intricacies of community policing in rural cities. It is these rural cities I have gained firsthand experience in policing these areas and know that presence alone can deter crime and increase the livability. I have also been able to interact with the great citizens of Union County and develop relationships that I still have and cherish today. In the beginning of my law enforcement career I was given the opportunity to be trained and certified as a DARE Instructor. As a Drug Abuse Resistance Education Instructor I was able to interact with the children of Union County and bring education to them on some of the most important issues that are currently affecting our youth and community as a whole. As an instructor I developed a passion to help our community become a better place for all of us.

In 2016 I transferred to the position of School Resource Deputy for La Grande School District and remained in that position until I took office as Sheriff January 2021.

My vision and goals as Sheriff are to foster and build community partnerships, work together to be more effective with other Union County professionals in law enforcement, EMS, fire, and human services, for the benefit of our entire community. We will have a Sheriff’s Office that is strengthened through better relationships with community input and interaction. I believe open communication with the residents of Union County is the most effective way for a Sheriff to address important issues that affect our community. I will also use my experience to place more emphasis on the youth within Union County so that our community has the brightest future.
As the Sheriff of Union County is not about me as an individual, but rather you the citizens and this great county as a whole. I want to thank everyone that has supported me and I look forward to meeting and gaining the trust and support of all of you.